U.S. District Judge T.S. Ellis imposed the surprisingly lenient 47-month sentence on Manafort, 69, during a hearing in Alexandria, Virginia, in which the veteran Republican political consultant asked for mercy but expressed no remorse for his actions.

Manafort was convicted by a jury last August of five counts of tax fraud, two counts of bank fraud and one count of failing to disclose foreign bank accounts.

Ellis disregarded federal sentencing guidelines cited by prosecutors that called for 19-1/2 to 24 years in prison. The judge ordered Manafort to pay a fine of $50,000 and restitution of just over $24 million.

Manafort, brought into the courtroom in a wheelchair because of a condition called gout, listened during the hearing as Ellis extolled his “otherwise blameless” life in which he “earned the admiration of a number of people” and engaged in “a lot of good things.”

“Clearly the guidelines were way out of whack on this,” Ellis said.

Manafort was convicted after prosecutors accused him of hiding from the U.S. government millions of dollars he earned as a consultant for Ukraine’s former pro-Russia government. After pro-Kremlin Ukrainian President Viktor Yanukovych’s ouster, prosecutors said, Manafort lied to banks to secure loans and maintain an opulent lifestyle with luxurious homes, designer suits and even a $15,000 ostrich-skin jacket. 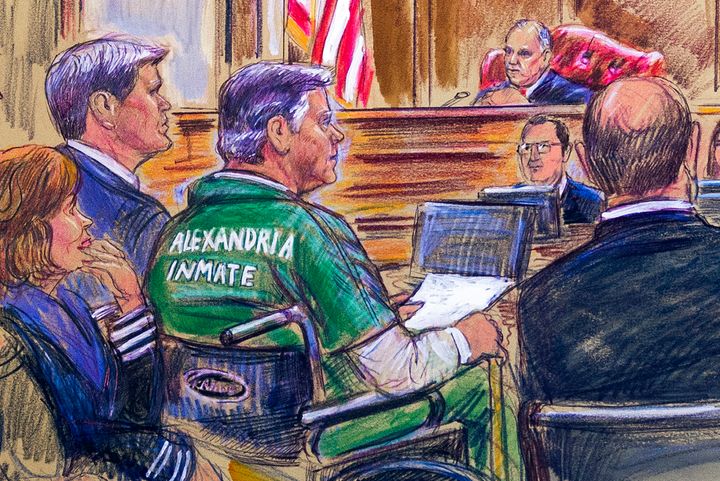 The judge also said Manafort “is not before the court for any allegations that he, or anyone at his direction, colluded with the Russian government to influence the 2016 election.”

The sentence was even less than the sentence recommended by Manafort’s lawyers of 4-1/4 to 5-1/4 years in prison.

“These are serious crimes, we understand that,” said Thomas Zehnle, one of Manafort’s lawyers. “Tax evasion is by no means jaywalking. But it’s not narcotics trafficking.”

Legal experts expressed surprise over the sentence. “This is a tremendous defeat for the special counsel’s office,” former federal prosecutor David Weinstein said.

Manafort’s sentence was less than half of what people who plead guilty and cooperate with the government typically get in similar cases, according to Mark Allenbaugh, a former attorney with the U.S. Sentencing Commission. “Very shocking,” he said.

Ellis, appointed to the bench by Republican former President Ronald Reagan, called the sentence “sufficiently punitive,” and noted that Manafort’s time already served would be subtracted from the 47 months. Manafort has been jailed since June 2018.

Manafort’s legal troubles are not over. He faces sentencing next Wednesday in Washington in a separate case for two conspiracy charges involving lobbying and money laundering to which he pleaded guilty last September.

Legal experts said the light sentence from Ellis could prompt U.S. District Judge Amy Berman Jackson to impose a sentence closer to the maximum of 10 years in the Washington case, and order that the sentence run after the current one is completed rather than concurrently. Jackson was appointed by Democratic former President Barack Obama.

Before the sentencing, Manafort expressed no remorse but talked about how the case had been difficult for him and his family. Manafort, who opted not to testify during his trial, told Ellis that “to say I have been humiliated and ashamed would be a gross understatement.” He described his life as “professionally and financially in shambles.”

The Coronavirus Could Force Countries To Prioritize Wellness…

The judge told Manafort: “I was surprised I did not hear you express regret for engaging in wrongful conduct.”

Manafort, with noticeably grayer hair than just months ago, came into the courtroom in a wheelchair holding a cane, wearing a green prison jumpsuit emblazoned with the words “Alexandria Inmate” on the back. It was a far cry from Manafort’s usual dapper appearance and stylish garb.

During a break shortly before the sentence was handed down, Manafort turned around and blew his wife, Kathleen, a kiss.

The case capped a stunning downfall for Manafort, a prominent figure in Republican Party circles for decades who also worked as a consultant to such international figures as former Angolan rebel leader Jonas Savimbi, former Philippine President Ferdinand Marcos and Yanukovych.

Ellis had faced criticism by some in the legal community for comments he made during the trial that were widely interpreted as biased against the prosecution. Ellis repeatedly interrupted prosecutors, told them to stop using the word “oligarch” to describe people associated with Manafort because it made him seem “despicable,” and objected to pictures of Manafort’s luxury items they planned to show jurors.

“It isn’t a crime to have a lot of money and be profligate in your spending,” Ellis told prosecutors during the trial.

Prosecutor Greg Andres urged Ellis to impose a steep sentence. “This case must stand as a beacon to others that this conduct cannot be accepted,” Andres told the hearing on Thursday.

Jackson ruled on Feb. 13 that Manafort had breached his agreement to cooperate with Mueller’s office by lying to prosecutors about three matters pertinent to the Russia probe including his interactions with a business partner they have said has ties to Russian intelligence. 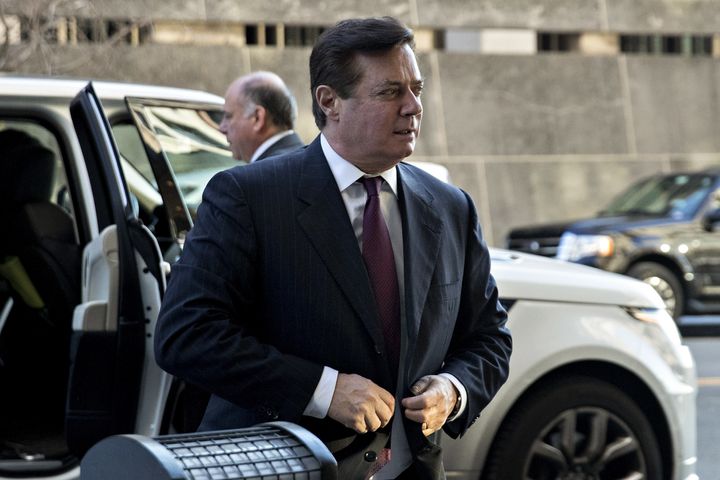 Bloomberg via Getty Images Paul Manafort arriving at the U.S. Courthouse for a status conference in 2017.

Manafort is the only one of the 34 people and three companies charged by Mueller to have gone to trial. Several others including former campaign aides Rick Gates and George Papadopoulos, former national security adviser Michael Flynn and former Trump personal lawyer Michael Cohen have pleaded guilty, while longtime Trump adviser Roger Stone has pleaded not guilty.

Trump, a Republican who has called Mueller’s investigation a politically motivated “witch hunt,” has not ruled out giving Manafort a presidential pardon, saying in November: “I wouldn’t take it off the table.”

“There’s absolutely no evidence that Paul Manafort was involved with any collusion with any government official from Russia,” Kevin Downing, another Manafort lawyer, said outside the courthouse.

The Democratic chairman of the House of Representatives Intelligence Committee, Adam Schiff, quickly accused Downing of making “a deliberate appeal for a pardon” from Trump.

Trump’s lawyer Rudy Giuliani said after the sentencing: “I believe Manafort has been disproportionately harassed and hopefully soon there will be an investigation of the overzealous prosecutorial intimidation so it doesn’t happen again.”

Mueller is preparing to submit to U.S. Attorney General William Barr a report on his investigation into whether Trump’s campaign conspired with Russia and whether Trump has unlawfully sought to obstruct the probe. Trump has denied collusion and obstruction and Russia has denied U.S. intelligence findings that it interfered in the 2016 election in an effort to boost Trump.

Burr Steps Down As Intelligence Chair

Trade setup: Nifty futures at discount to spot, yet index may try to go higher

Stocks surge in Bangladesh as exchanges reopen after two months

Stocks making the biggest moves in the premarket: Abercrombie & Fitch,…