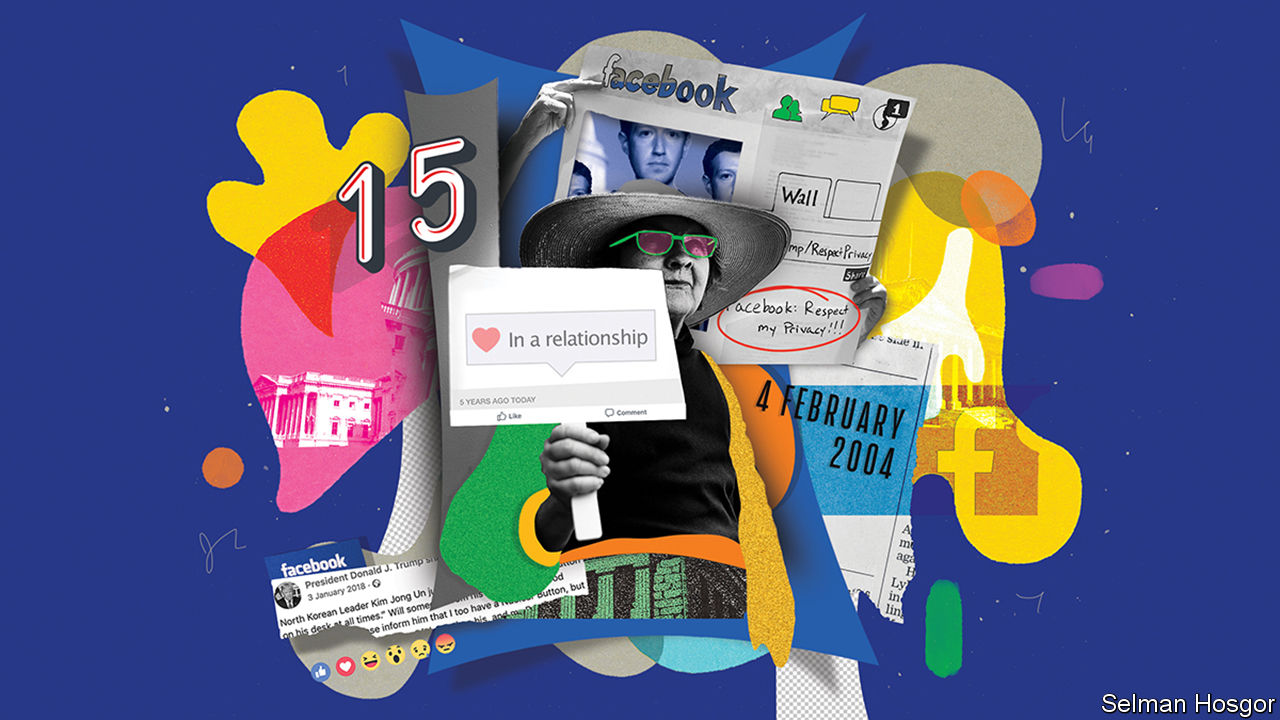 Assessing the Democratic field as the Iowa caucuses loom

Why more young Americans are cyber-bullying themselves

ON FEBRUARY 4th 2004 a young website with a baby-blue banner was born. Founded in a dormitory at Harvard, TheFacebook.com tapped into people’s instinctive desire to see and be seen. Few guessed how successful it would become. In 2008 Rupert Murdoch, the media mogul who had bought the social-networking rival MySpace, called Facebook the “flavour of the month”; the following year this newspaper warned in an article about Facebook that it is “awfully easy for one ‘next big thing’ to be overtaken by the next.”

Get our daily newsletter

Upgrade your inbox and get our Daily Dispatch and Editor’s Picks.

Instead Facebook has stayed on top by spreading wildly across America and the world and buying competitors, including the photo-sharing app Instagram and the messaging firm WhatsApp. Around two-thirds of American adults use its original social network. At its peak, the average user spent nearly an hour a day on Facebook’s platforms. Few companies have exerted such a strong influence on society, changing people’s communication habits, reuniting lost contacts, shaping their perception of world events and redefining the meaning of the word “friend”. “Every once in a while, changes in technology come along which are so profound, that there is a before and an after. Facebook is one of those,” says Roger McNamee, author of a forthcoming book called “Zucked”.

Birthdays are an occasion for reflection. In the 15 years since its founding, Facebook has altered America in three notable ways. First, it has shaped what it means and feels like to be young. The company has done this twice: once with its flagship social network, which became the pastime and addiction of college students and high schoolers in the mid-2000s, and again with Instagram, which is the digital drug of choice for their successors today, along with the rival app Snapchat.

The company has fostered a virtual “me-conomy”, where people (over)share their feelings, photos and comments. Some blame Facebook for fanning teenage narcissism and for short attention spans. Others say it has caused anxiety, depression and insecurity. Researchers have shown that people who spend more time on Facebook are more likely to think other people have it better than they do and that life is unfair.

The lasting effects of social media, and Facebook in particular, on young people’s psyches will not be fully understood for years, but it is clear that Facebook has changed human interaction. At the safe remove of a screen, bullying on social media has become painfully common; some 59% of American teenagers say they have been bullied or harassed online. Facebook has cultivated far-flung, online friendships, but it has changed the nature of offline ones, too. According to research by Common Sense Media, a non-profit, in 2012 around half of 13- to 17-year-olds said their favourite way to communicate with friends was in person. Today only 32% feel that way, with 35% preferring texting.

Second, Facebook has changed attitudes to privacy. The social network thrives through trust. After Facebook was launched, for the first time people felt comfortable sharing intimate details online, including their phone number, relationship status, likes and dislikes, location and more, because they felt they could control who had access to them. Users were vaguely aware that Facebook was starting to make a fortune mining this data and selling advertisers access to specific types of users, but they mostly did not object.

Opinions about privacy may be shifting again at Facebook’s hands, this time in reverse. Public scandals about outside firms getting access to Facebook users’ data, including last year’s Cambridge Analytica fiasco, have shone a light on the firms’ massive data collection. Around half of American adult users are not comfortable with Facebook compiling such detailed information about them, according to a survey by Pew Research Centre. Concerns about privacy and lax oversight probably played into the beating that Facebook’s reputation took last year. According to the Reputation Institute, a consultancy, Facebook’s standing among Americans fell sharply in 2018, and its score ranks significantly below other technology companies, including Google. A fresh scandal over Facebook spying on users’ online activities in the name of research may further dent the company’s image.

Third, Facebook has left a lasting mark on politics. The social-networking firm has become an invaluable tool for politicians seeking office, both through paid advertisements to reach voters and free content that spreads on the social network. “You’d be hard-pressed to find a politician who’s been elected in the last ten years who didn’t use Facebook,” says David Kirkpatrick, author of “The Facebook Effect”, a history of the social network. Two presidents, Barack Obama and Donald Trump, won election in no small part thanks to Facebook. In Mr Obama’s case, Facebook helped him fundraise and drum up support. In 2016 Facebook’s role was more controversial: false news spread wildly and Russians meddled with messages on social media, which may have helped Mr Trump gain an edge.

The rise of fake news and spread of filter bubbles, where people see their pre-conceptions reinforced online, have probably disillusioned many voters. Facebook has had a hand in spreading misinformation, terrorism and ethnic violence around the world. But it has also spurred civil engagement. Black Lives Matter, a campaign against police violence, began with a Facebook post and quickly spread through the social network. Much of the grassroots opposition to Mr Trump, from the women’s marches to groups like Indivisible, use the platform to organise themselves. Many other campaigns and movements have attracted members through Facebook and Twitter. “They give ordinary people a voice. That’s a net positive for society,” says Mr Kirkpatrick.

Can the social-media giant stay as influential in the next 15 years as it has already been? At the risk of being wrong about Facebook again, that seems unlikely. This is partly because its impact has already been so extensive. But it is also because of growing unease with the platform. As with all new technologies, from the printed book to the telegraph, social media can be used both for good and bad. Critics of Facebook are increasingly vocal about the harms, pointing out that Facebook is addictive, harmful for democracy and too powerful in making decisions about what content people see. “Big tobacco” is what the bosses of several top tech companies have started calling the social network, and politicians are speaking openly about regulation.

Though it has just posted record quarterly profits, it seems unlikely that Americans are going to increase the time they spend on Facebook proper. Time on its core social network is declining, probably because users are questioning whether it is as enjoyable as it used to be. Adults in America spent 11.5% of their online time on Facebook’s main platform, a fifth less than two years earlier, according to Brian Wieser of Pivotal Research. Instagram use is rising, but not enough to make up for the core social network’s decline. As more people question whether social media are good for them, Facebook could loosen its grip on America. The relationship with Facebook continues, but the love affair is over.

No-deal planning accelerates, at least for firms that can afford it

Justice Democrats want to be the left’s Tea Party

Republicans agree on rules for the Senate trial of Donald Trump

A battle over gifted education is brewing in America

The decline of Las Vegas weddings