Stack up US equities next to almost anything that is used to measure value right now, and the picture can elicit anxiety. Up 13 of the past 15 weeks, the S&P 500 is trading at historically high levels versus earnings, expected profits and sales.

Does that mean there’s no way to justify putting more money into a market where the Dow Jones Industrial Average has surged almost 4,000 points since August? No. Or at least, not theoretically.

Persistently low interest rates remain an inducement for many analysts and investors. While prices are stretched by historical standards, they say, it’s a mistake to use valuation as a signal for jumping in and out of the market.

“The potential is very high that we run with higher P/Es for longer than people think,” said Jim Tierney, AllianceBernstein’s chief investment officer of US concentrated growth. “Those that are going into this year saying, ‘Well we’re at 18.5 times earnings, P/Es have to come down,’ I think they’re going to be wrong in that assessment.” 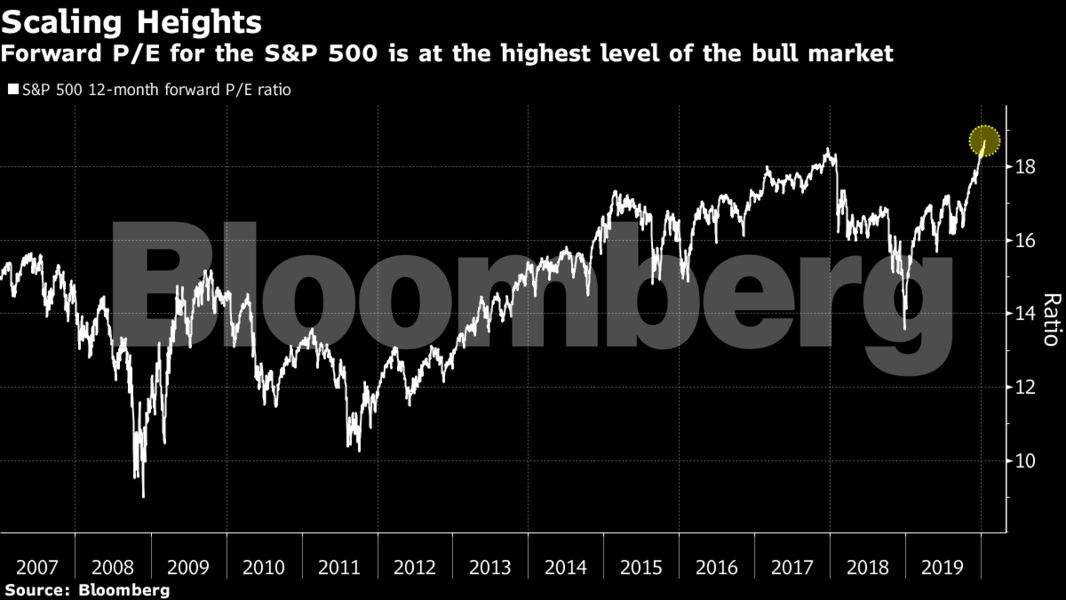 In May, Warren Buffett said shares looked “ridiculously cheap” when viewed alongside very low borrowing costs and inflation, interpreted by many as a warning that interest rates would rise. What the Berkshire Hathaway chief executive ended up getting right was stocks, which rallied. Nine months and 15 per cent later on the S&P 500, do the same conditions make it safe to jump into equities now?

Investors can be forgiven for approaching the question nervously. More pundits are equating the latest leg of the bull run to the one that occurred in the late 1990s, which ended with the eruption of the dot-com bubble. At the same time, the hazards of market timing are well known. Cash out now, or go all in? Always the big question.

According to AllianceBernstein’s Tierney, whose fund beat 96 per cent of its peers over the past year, structurally lower interest rates are fostering a new regime for stocks. His view is that prices have the potential to rise a lot more before reaching valuations that are justified by bond rates. Where’s that? As high as 30 times earnings, in his view.

MCX ties up with Religare Health Insurance to insure its…

Wall St Week Ahead: Investors look to coronavirus data to…

Markets expect depression-era job losses, but length of the…

An extreme assessment, to be sure. Equity multiples based on booked profits rose above 30 at the turn of the century, which went down in history as one of the worst ever to own shares. The trip up had been a profitable one, though, and high multiples were no obstacle to five straight years of double-digit gains starting in 1995. 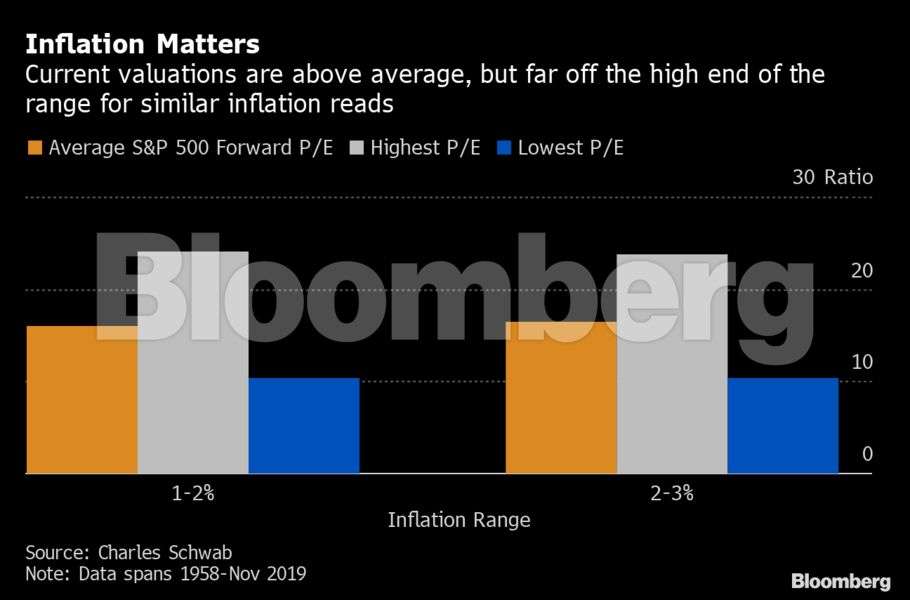 “Valuation of any metric is a terrible market timing tool,” said Liz Ann Sonders, chief investment strategist at Charles Schwab. “To say, ‘The market’s expensive therefore I’m a seller’ — that never works. The market historically has been rewarded with higher valuations when interest rates and inflation are sort of in that sweet spot.”

We’re there right now, she says, with inflation in the range of 1 per cent to 3 per cent. Data released this past week again pointed to subdued price pressures, and the Federal Reserve’s preferred gauge of inflation remains muted too.

According to data collected by Charles Schwab, in the past, when inflation has mirrored the levels of today, the price-earnings ratio for the S&P 500 based on future profits has averaged 16.4. While the current multiple is above that now, at 18.6, it’s still a ways off from the highest level recorded in a similar low inflation environment — 23.8.

Of course, should inflation rear its head or interest rates rise, that would complicate the outlook. According to strategists at Goldman Sachs, low bond yields drove 90 per cent of the S&P 500’s return last year, and stocks now trade at fair value relative to rates. The firm expects 10-year Treasury yields to “gradually rise” to 2.25 per cent by year-end, but the rate of change is critical for equities — the speed matters more than the level, they found. 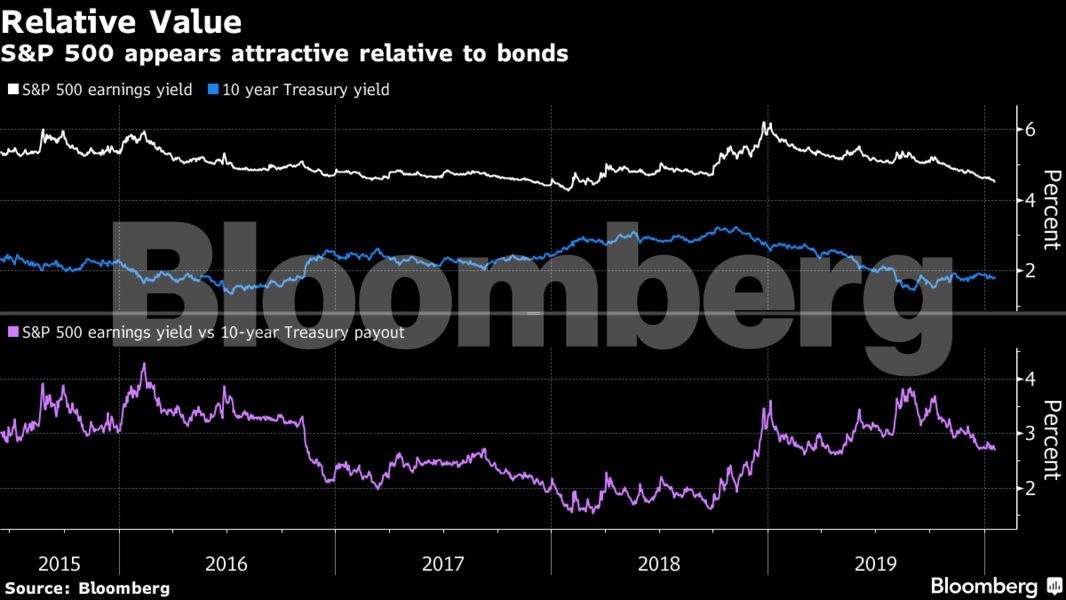 Currently, about 80 per cent of S&P 500 companies boast higher total cash returns — buybacks plus dividend yields — than the benchmark 10-year Treasury rate, according to Dennis DeBusschere, head of portfolio strategy at Evercore ISI. Even if 10-year yields jumped to 2.5 per cent, cash returns would still be higher for 70 per cent of stocks.

“Don’t fear increasing 10-year yields,” he wrote in an email to clients this week.

Still, with stocks marching to new highs, there’s a lot of embedded optimism. The largest US banks kicked off the fourth quarter earnings season in earnest this week, and the US and China finally put pen to paper on a Phase 1 trade deal. As the year progresses, there isn’t much room for disappointment.

“We’ve had this structural break with interest rates being lower — that’s one of the reasons why higher valuations feel more comfortable for many investors right now,” said Lauren Goodwin, an economist and multi-asset portfolio strategist at New York Life Investments. “Current valuations are expecting a lot to go right, earnings are only one of them, but comparing valuations of today to those historically, it’s something investors will have to grapple with.”

Job losses in March could be the worst in a decade, and that’s just the…

Prev Next
Stay With Us

U.S. oil industry pumps near record volumes even as demand and prices collapse

Which stocks should you look at now? Ashwini Agarwal…

Stocks making the biggest moves in the premarket: CarMax,…